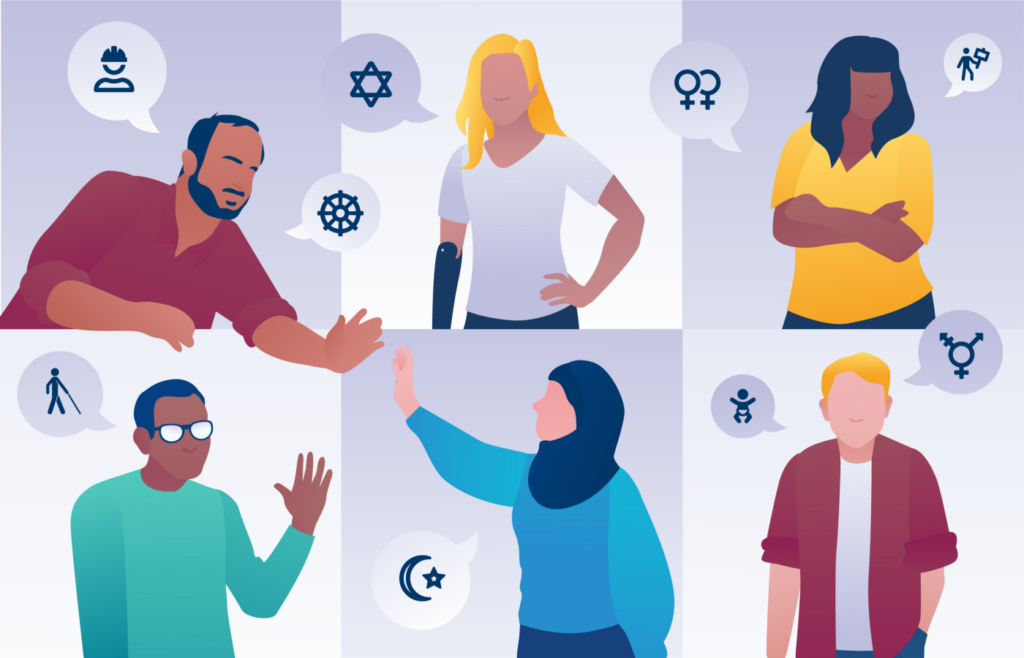 Ally (n) – one that is associated with another as a helper; (v) – to unite or form a connection between; to enter into an alliance.

For background purposes, let me share my beginning point for this important journey.

I was raised in a typical, white, middle-class, suburban neighborhood by a traditional family. We went to church on Sunday, we ate dinner together almost every night, I had to face the inquisitions of my father about how my day went, what I did, and what I learned (groan), and my mother was a stay-at-home mom. My parents struggled with money, but I never saw myself as poor or lacking. In this insulated environment, I had little exposure to people of color, and during this time, the idea of being gay, trans, bi, or non-binary was not acknowledged or talked about. I grew up playing cowboys and Indians, acting out a scene from the westerns. Sound familiar?

I never thought I was racist. I never felt I judged people by the color of their skin or their gender identity. I honestly thought the answer to “the race problem” was to not “see color.” I wasn’t judgmental about gay or trans people; I saw them as unique, almost anomalies of society. I never questioned the status of women; I just experienced women as “domestic workers” and caregivers. I didn’t know or see them as people who worked at a job. Sound familiar?

Yes, I was racist. I didn’t know I was a racist. If anyone had asked me if I was racist, I would have adamantly denied it. Would awareness of the atrocities we, as Americans, committed against people of color or different gender orientations make a difference? It would have helped but even knowing the causes of racism; I would not have learned that racism isn’t about overtly hating someone because
of their color, race, religion, or gender identity; it’s how we behave and respond to people that look or act differently. My racism resulted from my lack of understanding and awareness of how racism presents itself daily. Being surprised when a person of color speaks “eloquently.” Being curious about a person’s origin because they are a person of color. I was being suspicious of a person of color walking down the street or shopping in a store and feeling threatened by people who appear different than me—trying to act or refer to people in a stereotypical manner—excluding people from social interactions because they look or behave differently—making assumptions about people that are different without knowing them or their story. Consciously or unconsciously ignoring, shaming, or looking down on someone different from me.

How does a white guy get from being racist to being an ally?

It took work, empathy, study, reading, asking, and listening. It is an intentional effort. It took being vulnerable and willing to look critically inside yourself. It took time. Moving from being racist to being anti-racist and becoming an ally was a journey of over seven years. Each step along this journey resulted in a deeper understanding of how racial behaviors played out in my daily life at work or play. But, I have to say, the journey continues. Although I am very intentional in my effort to be an ally, I continue to
discover ways that my racist behaviors present themselves in my daily life. A friend recently revealed that she had transitioned from him to her. Rediscovering my relationship with a person I’d known as a man for years to now be seen as a woman was a personal, private struggle. The critical thing I learned was that pronouns matter. But I also learned that translating the pronouns we have assigned a person is difficult to change. Just like the prevalence of micro-aggressions that creep out unintentionally, pronoun mishaps
also happen.

To all of my business associates, friends, family, and acquaintances, I am, just like the journey I am on, an ongoing work in progress, and I apologize and ask for your forgiveness and maybe the tolerance for the mistakes I have made in the past and may make in the future. I hope you will forgive me and trust my intentions. My goal is to continue to become a better ally.